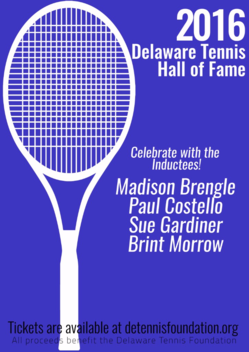 Congratulations to our 2016 inductees Madison Brengle, Paul Costello, Brint Morrow and Sue Gardiner. Also thank you to everyone who came to the Hall of Fame dinner and supported the Delaware Tennis Foundation through donations or purchases at our auction. We sincerely appreciate your support.

Madison Brengle was born in Dover, Delaware and was raised in a tennis family. Her mother is Gaby Brengle who is a member of the Delaware Tennis Hall of Fame and a coach at Dover Indoor Tennis facility. Madison played in her first professional tournament at the age of 14 and has been on the professional women's tennis ever since. Her best performance in a grand slam tournament was advancing to the 4th round of the Australian Open in 2015.  She is currently ranked 50th in the WTA singles rankings.

Paul Costello has been an avid tennis player for over 50 years. During the last ten years he has returned the favor to the sport he loves by becoming active in its volunteer organizations. He joined the board of the USTA Delaware District in 2006. In 2008, he became President of the board and served in that capacity for the next 4 yrs. During that time, he also served as the Delaware delegate to the USTA Middle States Board where he chaired the Strategic Planning Committee. Paul has served as the President of the Delaware Tennis Foundation for the past two years.

Sue Gardiner has been the owner and operator of Elkton Indoor Tennis for almost 20 years. In that capacity she has enthusiastically supported the sport by opening her facility to many USTA junior programs and the University of Delaware tennis teams. She is a strong recreational player and has captained many USTA league teams and plays in the World Team Tennis league. In the past, she has served as a member of the USTA Delaware District Board for many years. Sue is a USTPA certified professional.

Brint Morrow was a top ranked junior tennis player achieving a #10 ranking in the national boys 16 and under division. A four-time high school tennis champion in Delaware, Brint then played at the University of North Carolina where he was an All American in doubles.  Brint has also won several Delaware State Open singles and doubles titles.  He recently reached the doubles final of the National 35 and over Hardcourt Tennis Championships.  His father Peter also played at the University of North Carolina and is a member is the Delaware Tennis Hall of Fame.