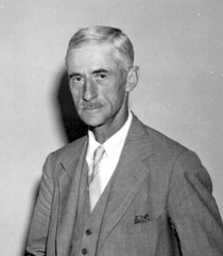 William du Pont, Jr. (February 11, 1896 – December 31, 1965) was an American businessman and banker. He was also a prominent figure in the sport of thoroughbred horse racing. He designed, built and owned Delaware Park Racetrack in partnership with Donald P. Ross. It opened on June 26, 1937.

Known as Willie by family and friends, he grew up at Montpelier, the historic Virginia home of President James Madison. He moved to Delaware in the 1920's. He inherited Bellevue Hall when his father died in 1928. Willie greatly expanded the horse facilities at Bellevue, including building two indoor tracks and an outdoor track. In the late 1940's he also built both an indoor and an outdoor tennis court. Following du Pont's death the property was purchased by the State of Delaware in 1976. It was opened to the public as Bellevue State Park on July 2, 1977. The Bellevue Tennis Center, with its 8 Har-tru courts, operates to this day.

In 1947 Willie was instrumental in the building of the first all weather tennis courts in Haynes Park in Wilmington. Those courts continue to be used for junior tennis programs in the summer.

Willie married Margaret Osborne, an international tennis champion, in 1947. From 1941 to 1962 she won a total of 37 singles, women's doubles, and mixed doubles Grand Slam titles. She is 4th on the all-time list despite never playing the Australian Championships. Willie didn't want his wife to be gone for such a long period time. She won 25 of her Grand Slam titles at the U.S. Championships (now the U.S. Open), an all-time record.

In the early 1950's Willie was made chairman of the board at the Delaware Trust Company, retaining his position as president as well. Osborne and du Pont divorced in 1964. Du Pont Jr. died at the Wilmington Medical Center at age 69 on December 31, 1965.